Note: this post has previously been published in Finnish language also.

On our summer vacation trip for 2012 me and Minna travelled to Mexico, Playa Del Carmen on the Yucatan Peninsula. There I did a scuba diving excusion to a Cenote cavern, called Chac Mool. Unfortunately Minna was unable to join me on this excursion. I also took some pictures and video, which are shown at the end of this post. 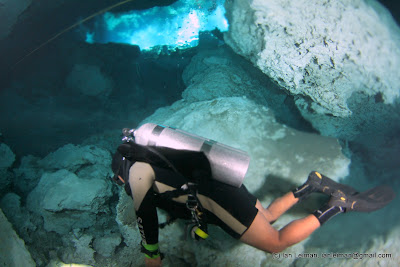 A Cenote is a natural pit, a sinkhole, simply said: a hole in the ground that leads to a network of underground caverns filled with water, which are actually underground rivers and lakes. There are thousands of Cenotes in the Yucatan peninsula, which is composed of porous limestone. There are virtually no visible rivers and lakes on the surface of the entire huge peninsula. Instead all the fresh water from rainfall flows underground in a huge and complex network of underground rivers and lakes contained by the caverns, which eventually lead to the ocean. When the roof of a cavern collapses due to erosion, a ”Cenote” is formed. Some Cenotes are just tiny holes at the surface, whereas there are some huge Cenote caverns that can be tens of meters in diameter. Near the ocean some salt water may enter to the caverns, and the bottom water is salty, but at the top there is always cool fresh water, which is incredibly clear and pure.

The Maya people used Cenotes as a source of fresh water, but the biggest Cenotes were sacred, sometimes used also for sacrificial rituals. Temples and cities were built near some of the largest and most sacred Cenotes, and the Chitzen Itza serves as one of the most famous examples.

Nowdays the Cenotes and the cavern systems accessible from the Cenote entrances have become popular cave diving destinations. There are a great number of Cenotes at the Playa Del Carmen region, that have been made accessible for scuba divers. Usually one should – indeed must – have speciality training and proper certifications in order to scuba dive in any kind of a cave or a cavern. However, many local dive centers at Playa Del Carmen region organize guided excursions, on which any certified open water diver can join. On these excursions so called ”cavern diving rules” apply, which means for example that the dives are done no farther than 60 meters from the nearest exit, daylight from the exit must be always visible, there must be room for at least divers side by side, a guiding line must be within arms reach, there must be a certified guide and the guide to customer ratio does not exceed 1:4. Going any deeper inside the cavern would be considered ”cave diving”, and requires due certification. It is extremely easy to lose your life in the caverns. Therefore, one should follow strict rules and have proper training and special equipment required for this demanding environment. I went to an excursion arranged by the Tank Ha diving center on 6 July 2012, and we went to the Cenote Chac Mool to do two dives. The Cenote is about 20 minute drive south from Playa Del Carmen. A guided two tank trip costs 120 USD, including the loan of a proper LED torch, entry to the Cenote, drinking water and a sandwitch. You can rent all scuba gear for an additional 15 USD.

We were three customers, me and two gentlemen from Texas. Our guide was a local Ivan, who has been diving for 2 decades and has done 7000 dives. We started at 9 AM from Tank Ha office with a pickup truck, and got back around 1 PM. All Cenotes are located in privately owned land, so you must pay an entrance fee to all of them. The land owners have made access roads, paths and piers to provide easy access to the Cenote entrances. Inside the caverns have been marked with fixed guiding lines.

We did the first dive from the right hand side entrance and went as far as we could with 1/3 of the gas we had in our single aluminium 80 cu-ft (12 liter) tanks. Me diving with my metric SPG, that meant 140 bars for return, while for the americans it is 2000 PSI left. This allows you to get back to the exit using the second third of your gas and leaving 1/3 for reserve. This is called the ”rule of thirds” diving practice, which is something you should use in the overhead diving environment. Our guide Ivan had double tanks, which is what cave divers normally use. In this case he had plenty of reserve air to provide for us customers, in case of an emergency. On both of the dives I had half of my gas left on return (100 bars).

Our maximum depth was 12 meters, and on the first dive we got 20 minutes away from the exit following the main line, and the we dove back another 20 minutes. However, the main line took a route that went around the cavern such that there would have been a quicker way out across the main chamber. You could see the daylight from the exit all the time, but it did appear to be quite far away at some points, and it was sometimes behind us, so a lot of time all you could see at front of you was just rock. The water was absolutely crystal clear and visibility was just unbelievable. It felt almost unreal to be floating there in between the rocks and rock formations, and seeing the daylight glowing in the distance and your dive light beams illuminating the cavern walls. It is an experience that cannot be explained by words, not felt even by looking at pictures – you just have to go there yourself to fully feel it.

At the depth of 8…10 meters we encountered and went over the halocline. This is the boundary between the fresh water at the top, and salt water below that flows from the ocean. When crosing the halocline you lose proper visibility and everything looks fuzzy and unclear. You cannot even read your gauges, so it is best to quickly move away from it. At first the halocline felt kind of scary, being deep inside a dark cave and not really seeing anything clearly, but crossing it couple of times makes you understand how to deal with it. The halocline is not very thick, half a meter at most. On both sides of it the water is crystal clear, and you can actually see across it, but when your eyes are inside it you cannot see anything but fuzz and blur. The fresh water was a little cooler, about 25 degrees (C), whereas the salt water was almost 30. A long 3 mm wetsuit was a good choice.

We also went past the ”death warning signs”, which were put at the front of the cave entries, where you can dive deep into the caves and the underwater river system that interconnects to several other Cenotes in the area. Going beyond these signs requires cave certification. In April 2012 three divers were found dead in the cave beyond these signs, a guide and two customers with no cave certifications. Nobody knows what happened, as the deceased divers are the only one who would know. What is known is that they were found dead with empty tanks in a place quite deep inside the cave where they should not have gone into with their equipment and capabilities.

Both our dives went really nicely and smoothly without any issues or incidences. The second dive was to the left hand side, and we also visited an air dome, where we could get our head above surface and breath warm and moist cavern air coming from a tiny hole going to the surface. On the second dive we went into sections where there actually was no direct visibility to exits, and there was no daylight to be seen.

Diving inside a Cenote was a unique and thrilling experience, and you should definitely try it if in the region and if you feel confident enough about diving in this kind of place. Probably this is not good idea for an absolute beginning scuba diver, or if you have any issues in being in a confined place. You should also choose your dive center really carefully. I would certainly dive with Ivan from Tank Ha anytime again.

Unfortunately Minna could not attend this trip due to an ear barotrauma she got from our first day of diving.

I did of course bring my camera (Canon 7D + 2x Ikelite DS161 videolight strobes) and tooks some amount of pictures and video: